“As we used to float“ at Berlinische Galerie

Julian Charrière is deepdiving in contaminated waters – watch „As we used to float“ at Berlinische Galerie until April 8th ‘19.
_____

Julian Charrière is taking us to the Bikini Atoll, the archipelago that was depopulated in order to serve as atomic test site during the cold war.

At Berlinische Galerie he shows underwater video shots of ship wrecks and rotten architecture overgrown with algae. He pairs these with shots of the deserted island, where nothing but palm trees and brutalist concrete structures remained. The bunkers were used as gigantic covers protecting the camera equipment documenting the atomic tests.
The calm appearance of this forlorn paradise is misleading as it is still radioactive.

As a reminder of this coconuts from Bikini are placed on the gallery grounds coated with lead in order to keep the radiation inside.

Charrière’s photo series of kitschy island views with ominous white dots is another tribute to this. These spots were created by sand from the nuclear site that had been placed on the photo negatives during the development process leaving burn marks on the photo paper. 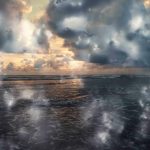 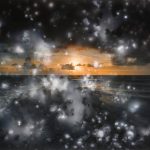 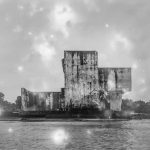 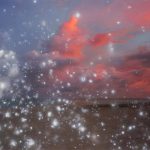 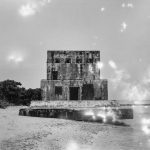 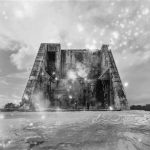